Need A Garbage Disposal Installed? We’ll Be There Today

All of our drain clearing services include: 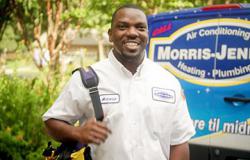 We keep our trucks fully stocked, so we can fix your garbage disposal right then and there—no need to schedule another appointment.

You’ll always know the price of your garbage disposal repair before any work begins.

We’re here ’til midnight and available on weekends, too.

Have you already had a plumber tell you it’s time to replace your old garbage disposal? If you’ve been Googling anything like, “how to tell if I need a new garbage disposal” or “garbage disposal replacements in Gastonia,” then you’re already considering installing a shiny new disposal. That’s great! Our plumbers just so happen to be garbage disposal experts.

If you’re still on the fence about a new disposal, we talked to our plumbers about some of the biggest signs that you should replace your garbage disposal:

· You frequently have to press the reset button. If you have to reset your disposal all the time, your disposal might be getting old and weak, or the electrical connections might need to be fixed. Didn’t know your garbage disposal had a reset button? You’re not alone! FYI, it’s on the bottom of your disposal.

· Your garbage disposal keeps clogging and/or smells bad. If your garbage disposal isn’t working, it can’t chop up food scraps (at least not as well as it used to!). If that’s the case, bits of food will get lodged in your drain and will start to rot and stink. This also can start to clog up your sink as food starts blocking off the flow of water.

We know it’s frustrating when your garbage disposal doesn’t get the job done anymore. That’s why we aim to make it as easy and painless as possible for you to schedule your new garbage disposal installation!

Are you a researcher? Do you prefer to look up your different options, compare reviews, and do the shopping yourself? That’s totally ok! If you’ve already purchased your own garbage disposal, we can install it for you!* Don’t wanna deal with the stress of shopping around for a garbage disposal? No worries! We have plenty of disposals in stock, and our certified plumbers can help pick the perfect one to meet your Gastonia home’s needs! We stand behind our work. When you choose to install a garbage disposal we supply, we also offer a labor warranty and a parts limited warranty, so you can rest easy! *We cannot offer warranties beyond the manufacturer warranty for customer-supplied garbage disposals
Installations Made Easy!

Some things can’t wait! Your garbage disposal is a vital part of your kitchen, and not having one (or not having one that actually works) can make cooking dinner a pain. We get that! That’s why we offer same-day service, which means we’re often able to get to your home and install your new garbage disposal the same day you call!

Do weekends or evenings work better for you? No problem! We’re here seven days a week til midnight, and we don’t charge extra for those weekend or evening appointments. After all, you shouldn’t have to take off work for this!

Not only do we like to give you plenty of options on appointment times, but we wanna make it easy to schedule your garbage disposal installation in Gastonia! Whether you prefer to keep it old school and give us a call (704-357-0484), or if you prefer texting or using our chat feature on the website, we’ve got something for everyone. In fact, you can even click the nifty button below!

Prevent Future Damage to Your Disposal

Once your shiny new disposal is installed, you’ll wanna take good care of it so it lasts as long as possible! You should only be putting things down the kitchen drain that your disposal is equipped to handle. That means no stringy vegetables, eggshells, coffee grounds, bones, or nuts!

No one wants to stick their hand down the drain to dig gloopy pieces of scrabs from the disposal! If you take the care needed to keep your garbage disposal clog-free, it’ll love you back so you won’t have to stick your hand down there again!